Aotearoa’s East Cape juts out into the Pacific Ocean like the fin of a fish, offering a myriad of cultural and historical landmarks. As the easternmost point of New Zealand, it’s the first place to see the sunrise every day – and it’s also renowned for its high number of sunshine hours.

From the intricately carved St Mary’s Church to the Tolaga Bay Wharf, New Zealand’s oldest pohutukawa tree, and the East Cape Lighthouse standing sentinel over the Pacific Ocean, the landmarks and scenery of the East Cape are distinctive and varied. And it makes for a beautiful, memorable summer Kiwi holiday. 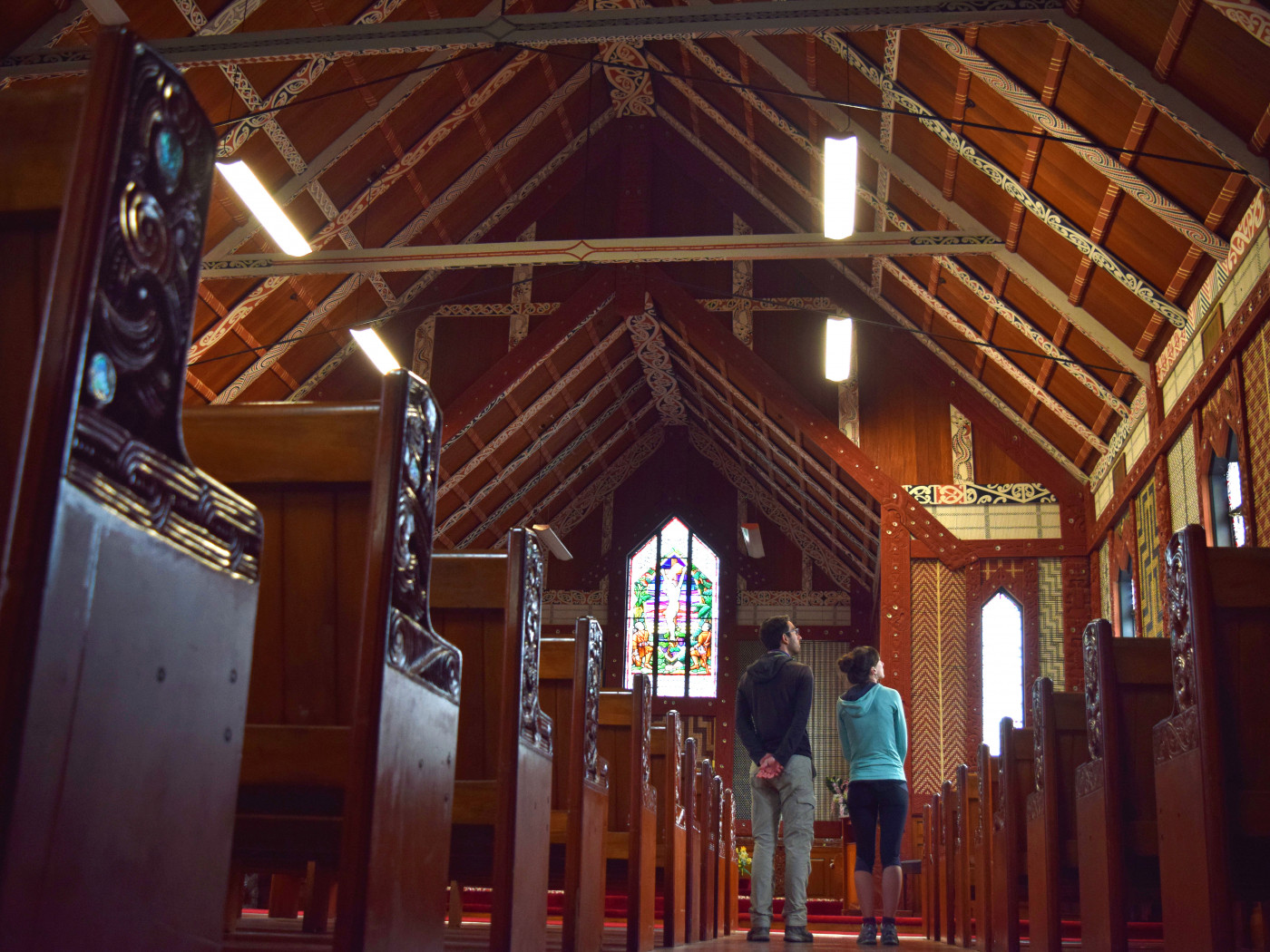 With an interior crafted by local Ngāti Porou carvers and weavers but with a structure that is distinctly European, this stunning church displays a meeting of two cultures and was built as a memorial for the soldiers of Ngāti Porou who died in WWI.

Famous Ngāti Porou leader, Sir Āpirana Ngata was the skilled mastermind behind the interior design. He was known for his dedication to reviving the dying Māori art and craft skills in general, and St Mary’s was one of his first initiatives. A short 20-minute drive from Ruatoria – the meeting point for the Maunga Hikurangi experience – St Mary’s is easy (and essential!) to fit into any East Cape itinerary.

Both one of the best places on the Cape to dangle a fishing line and a fascinating snapshot of Aotearoa in the first quarter of the 1900s, Tolaga Bay Wharf is well worth the 30 min walk to the end and back. This epic structure juts 660 metres into the Pacific Ocean and was opened in 1929 to allow large ships to load and offload goods. Recently, it’s been beautifully restored and in the summer months, you will find locals doing bombs into the azure waters below. 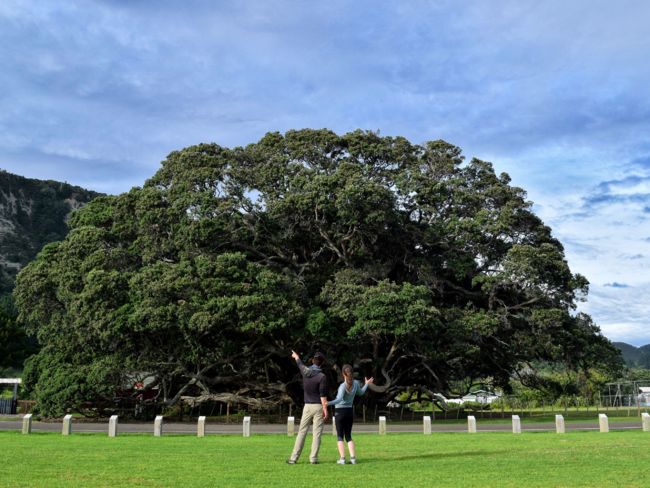 Caption: The oldest Pōhutukawa tree in New Zealand stretches its branches across the sky. Credit: www.newzealand.com

Imagine a tree old enough to have been around when Moa roamed Aotearoa – that’s the age of Te Waha-o-Rerekohu, New Zealand’s oldest pōhutukawa tree.

Standing on the grounds of the local school at Te Araroa, a tiny coastal settlement at the north end of the cape and the birthplace of Sir Āpirana Ngata himself, it’s a huge, healthy, and bushy specimen.
It’s at its most stunning around Christmas time when bright red flowers adorn its 600 year-old branches. Please visit https://ngataongaohinerupe.com/ for local tours of the area. 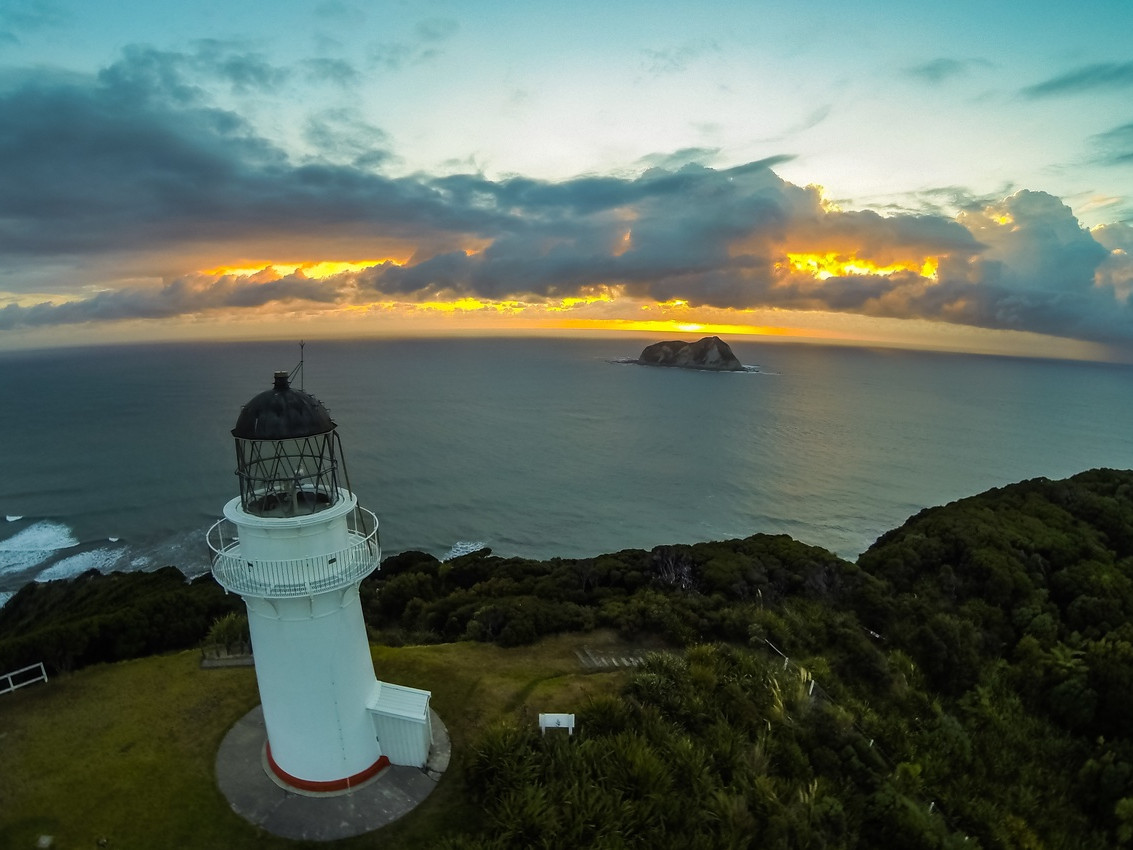 Take a 22km, no-exit gravel road from Te Araroa to reach the most easterly point in Aotearoa, which is where the East Cape Lighthouse stands proudly 154m above sea level.

Accessed by a walking track of more than 700 steps, the exertion is well worth the views at the top. Afterward, consider cooling off for a dip at one of the many golden beaches just nearby. It’ll be the perfect end to your stunning journey to the East Cape.

The hours tend to go a little slower on Aotearoa’s East Cape. Make the time to explore this little-known region of New Zealand and its many gems before or after your Te Urunga Sunrise Experience with us.

How the Sun Connects our World Together

Legends of the East Cape