The East Cape of New Zealand is a region steeped in culture and history. Graced by sacred mountains and a striking coastline, its many significant landmarks and destinations hold the keys to a treasure trove of stories; past and present. From the North Island landmass that Māui famously fished up out of the sea, to being the first place in the world to see the sunrise, the pūrākau (legends) below are just a sample of the rich cultural history found in the East Coast.

It makes sense to start where it all began, with the bold, clever, and brave demigod Māui, an icon of New Zealand’s creation story. Well-known for many heroic feats, perhaps his biggest achievement was fishing up one of the islands that became Aotearoa.

As the legend goes, Māui had always wanted to go fishing with his brothers, to prove his talents to his doubtful siblings. One night, he hid in the hull of their waka (canoe), equipped with a powerful magic fishhook carved from the bones of his ancestor. After revealing himself from hiding and casting his hook into the sea, it wasn’t long until he landed a catch much larger than any of them had seen before. After a battle to haul it to the surface of the water, they were delighted to find they had in fact caught a huge whai (stingray), which eventually became known as ‘Te Ika-a-Māui’ (the fish of Māui) or the North Island.

The first part of this great fish to emerge from the water was the peaks of Maunga Hikurangi and as the waters receded, their waka Nukutaimemeha became stranded in Takawhiti, the lake near the mountain’s peak where it is said to be in the petrified form today. Māui wished to preserve the great fish with its smooth body but whilst he was away consulting with their elders, the brothers began to chop greedily at this fish, forming the many valleys and mountains we see today.

At 1752m tall, the towering peak of Hikurangi gives the East Cape the honour of being the first place in the world to be illuminated by the rays of the rising sun each day. It’s also given the rohe (region) the title of ‘the land of the first light’ – and the Māori name Tairāwhiti, representing the coast where the sun rises and shines across the water.

However, the rohe hasn’t always enjoyed this much sunlight. In ancient times, the days were short, and the sun was known for racing by too fast before the day’s work had been done. One day, after eating his hāngi in the dark yet again, Māui decided enough was enough, and he hatched a plan to tame the sun. He and his brothers sought to capture Tamanuiterā, the sun, by journeying east and laying out a trap of strong flax ropes.

As day broke and the sun rose, they threw the ropes over the sun, and ensnared it in a noose. It became angry and violent, but after a long struggle and being beaten by Māui’s magic jawbone, Tamanuiterā conceded victory and began to wearily lift into the sky, albeit much more slowly. Since then, the sun has always moved carefully across the horizon, and we have plenty of time to enjoy all the activities that the longer daylight hours bring.

A representation of Māui taming the sun. Credit: MythDancer.

It’s not only Māui that has a long-held legacy in the area. Another famous ancestor is the voyager Paikea, who after escaping from his brother Ruatapu, journeyed from Hawaiiki by riding on the back of a tohorā (whale) to the eastern shores of Aotearoa. Paikea eventually made his way to Rangitukia near the East Cape, and there he met Huturangi. From their union came Pouheni, who fathered Tarawhakatū, who had Nanaia, who had Porourangi — the eponymous ancestor of our Ngāti Porou tribe. Paikea and Huturangi in time settled in Whāngārā, and it is said his whale turned into stone and became the offshore island located there. This story inspired the popular book and film, Whale Rider.

Today, the Maunga remains a sacred and revered place for our Ngāti Porou iwi. Nine whakairo (carvings) adorn the area, called Te Takapau a Māui, below the tihi (summit) of the mountain. Each carving represents a key part of the story that shaped the area’s illustrious history.

If these legends have inspired you to learn more, you’ll gain an even deeper insight on a visit to Maunga Hikurangi. Our master storytellers will share stories and wisdom passed down from their tīpuna (ancestors), and you’ll experience the magic of the first light for yourself on a mesmerising Te Urunga sunrise tour. 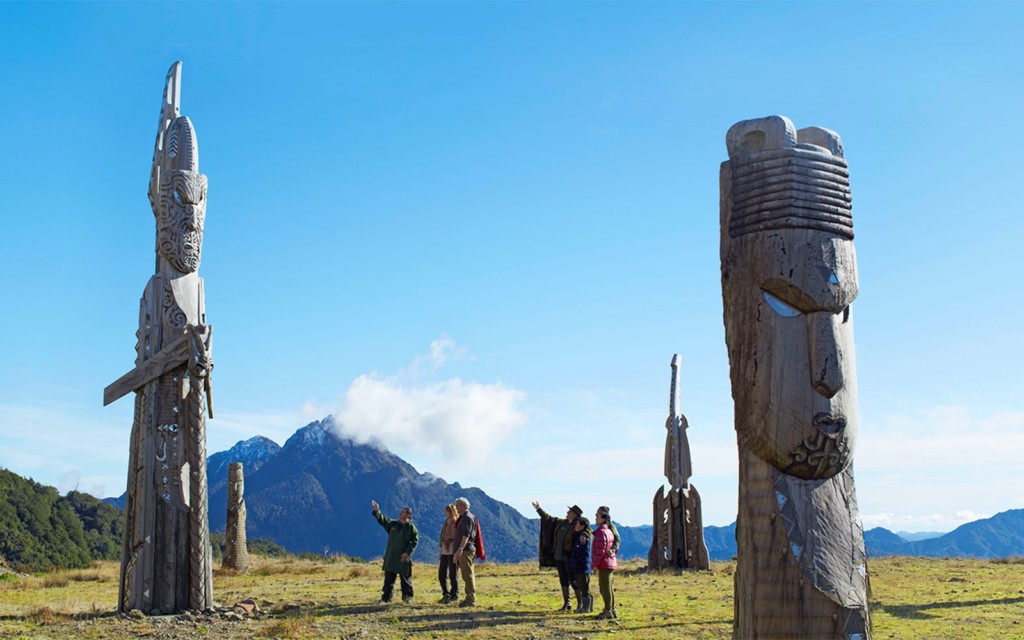 Stories being told at the summit of Maunga Hikurangi. Credit: Tairāwhiti Gisborne.