Maunga Hikurangi stands proud as the highest peak in the Raukumara ranges at 1754m – in fact, it is the highest non-volcanic peak in the North Island, its summit of alpine scree jutting into the sky. This height, and its easterly position, means Maunga Hikurangi is the first point in the world to see the sun’s rays every day. These qualities make it an incredibly sacred place to Ngati Porou – it features heavily in legend and it is a core part of our identity. It is also important as a place of abundant wildlife and food resources. 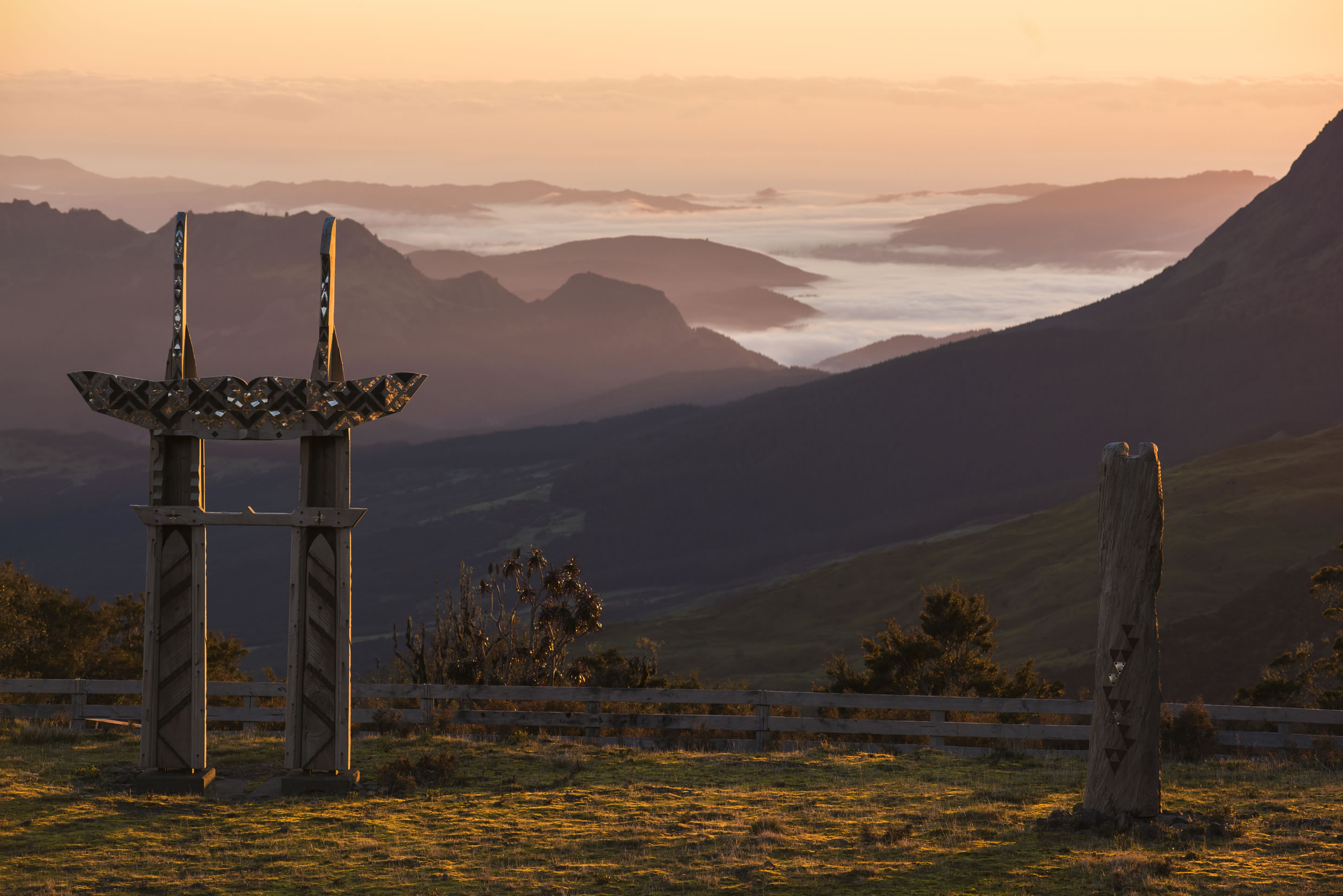 The mountain is steeped in Maori legend. When the demi-god Maui (founding ancestor of the Ngati Porou people) caught the giant fish that became the North Island, Maunga Hikurangi was the first point to be pulled up from the sea. The mountain is also said to be where Maui’s canoe now rests.

The nine larger than life carvings that stand on the mountain – an installation entitled Te Takapau a Maui – are related to Maui, his whanau (family) and his legends. The carvings were created by students from Toihoukura under the guidance of Sir Derek Lardelli and put in place in 2000 to commemorate the dawning of the new millennium, and their exquisite shapes and stories can be explored on the Te Urunga-Tu Sunrise experience.

To us, of Ngati Porou, the mountain is tied to who we are – you’ll hear it always in any of our mihi (introductory speeches):

In the 1870s the crown took ownership of the mountain and surrounds and turned it into a state forest park. In 1990, 3780 hectares was returned to Ngati Porou – including Maunga Hikurangi. Pakihiroa Farm on the foothills of Maunga Hikurangi is Ngati Porou’s biggest operation, producing high quality sheep, beef and wool for export and employing many in the community.

The mountain is the only known natural habitat of the Hikurangi tutu (Coriaria pottsiana). The nearby Raukumara forest park is rich with iconic native trees such as rata, rimu, tawa, kahikatea and beech – and birds are plentiful including tui, fantail, kereru, and even kaka and kiwi. Introduced deer and pigs make hunting a popular pastime (and source of local wild food) in the area as well. Deer and pigs, along with possums, rats and stoats, are pests that drive native species to local extinction and also destroy the ngahere (forest).

There is a public walking track that leads to the summit, but visitors must always contact Te Runanganui o Ngati Porou before arriving because sometimes the track is closed for cultural or farming (eg lambing) reasons.

Top things to do on the East Cape